Kendra is confronted by a man wearing pantyhose covering his head and face. It is obvious what he is after. Her money. But because it took her so long to earn it, Kendra begs him to take something else. She then starts to flirt with him and tells him that he can do anything she wants to him.

The man agrees, but tells her that he has to tie her up. Kendra agrees and soon she is tied up and sucking on the man. After, they are done, the man gets ready to gag her. “Aren’t you going to fuck me!” Kendra asks, hoping he answers, Yes!. But soon the man has her struggling bound and gagged.

Little by little, Kendra get more turned and she starts to come on to the man again, even though she is bound and gagged. In the end, Kendra ends up tied up and gagged on her sofa. Her tits are out and her pantyhose and panties are down.

But Kendra couldn’t be happier. because instead of her having to give up her money, she given blow jobs and pussy instead. To her, she came out of this situation with more than a girl could hope for. 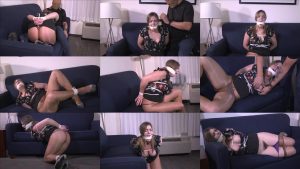