Nyssa Nevers is a brave woman, which is why she was willing to testify in the criminal trial of a ruthless mob boss, and she’s going to need all of her courage if she wants to survive until the trial! It seems the cop assigned to protect her is actually working for the crime lord, and he is determined to make sure she doesn’t talk – ever!

After making her strip completely naked, he binds and gags the witless witness before stashing her in the bathroom and informing her of his plans: She’ll be left bound and gagged, hogtied in the rapidly filling tub until she slips beneath the surface and expires! Afterwards, the cop will untie her, remove the gag and report her demise as an accidental overdose!! Before he can implement the plan, the district attorney arrives, and the cop has to keep Nyssa quite and out of sight as he tries to get rid of him!

Nyssa fights to make herself heard, screaming into her gag and tossing things around the bath, but her pleas goes unanswered, except by the cop who returns to gag her even more severely!! Now, hogtied with the tub filling, Nyssa slips below the surface, bubbling in her panic! Will she be rescued?? 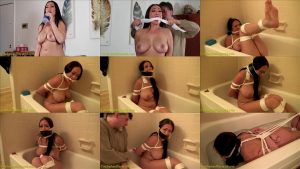