When Davina accepted an offer to room with her friend at a convention overseas, she wasn’t expecting an opulent palace, but she certainly wasn’t expecting what she got! After rebuffing her host’s very physical advances, she found herself stripped to her bra and panties and lashed tightly to a table bolted wall!

A tight crotch rope sawed away at her most sensitive areas, and her legs were bound in such a manner that they ensured she could not close them, making her plight even more humiliating! Unable to call for help due to the gag that had been taped into her mouth, she desperately and methodically tried to pick at the knots that kept her prisoner, but when her friend discovered this, he taped her fingers together into useless stumps and stuffed even more packing into her mouth before winding sticky grey tape over her already silencing gag!

Now with her head locked in place and her ability to struggle reduced to a very bare minimum, she’s helpless to free herself! She gag talks up a storm, cursing out the man and grunting in frustration, but sooner or later, her host is going to get what he wants, whether she’s willing or not! 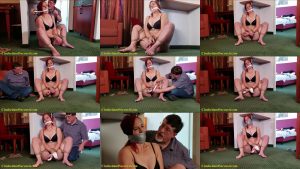