Ren is so tired from when she gets home from work that she doesn’t even notice the man hiding in the bushes who follows her in and forces her to the floor.

She struggles against him but he quickly secures first her wrists and then her ankles before packing her mouth and winding microfoam tape around her head sealing the gag in.

She’s secured into a hogtie before the man takes a few groping liberties with her before leaving her on the floor. He returns briefly to make sure she’s secure enough for him to make his mistake before leaving poor Ren to struggle on the floor till she can either free herself or someone finds her. 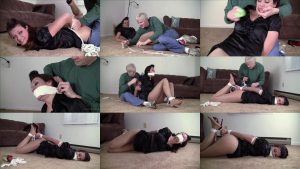