Jeanette was looking at some pictures of her favorite models in bondage in order to guarantee herself some pleasant dreams. Well, she got the pleasant dreams, but her awakening left a LOT to be desired! Somehow, while she rested, she had been tightly bound and tape gagged! As she slowly awoke, she realized her predicament and began to thrash and struggle fiercely in terror. How would she get out? Who had done this to her? Was he still there? What would happen next?

She got the answer to the last two questions when the man reappeared and drug her into the main room where he added an insane amount of rope to her already helpless frame, including a tight crotch rope that made struggling QUITE agonizing! The man tore the tape from her mouth and stuffed a big red ball gag into her mouth, and kept tying and tying the frightened fettered female until she was folded and bound into a tight ball, unable to move a muscle, but Lord, how she tried! Her bare feet wiggled mightily, not that it helped her at all!

Just as she was convinced her innocence would be stolen from her, she awoke in her own bed! It had all been a dream after all! She relaxed, until she saw the rope marks on her body, and then the real questions began! 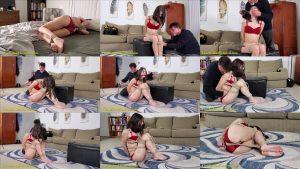