Chrissy is putting on makeup when a man comes up from behind and grabs her. He over powers her and carries her away. Sometime later, Chrissy opens her eyes to find herself in a dark place. The first thing she realized is that she is tied up and gagged. She then figures out that she is in the trunk of a car. After struggling in the dark for sometime, the trunk is opened and she is helped out by a man. He makes her hop over to a chair in the garage where she is tied down. When she is left alone, she works the chair over to the garage door and tries to make noise hoping someone outside will hear. But then the man returns to find her doing this. To punish her, he ties rope around her neck. He then leaves her again. But this time worried she might choke if moves around in the chair too much. He also leaves her with her boobs exposed. 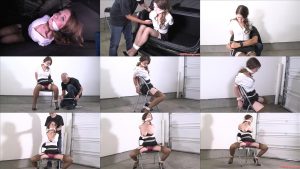