Take a peek inside an authentic play session with the very fun Utmost Restraints and Elise Graves. Be a fly on the wall as Elise is secured into a bespoke bondage device, perfect for displaying her anterior body. Watch Utmost Restraints lower a large bell jar over Elise’s head, hoping to dampen her cries.

Listen to Elise struggle with nipple suction and clamps. Meanwhile, Elise’s pussy gets the unique opportunity to know what a concrete mixer feels like, which forces Elise to orgasm many times. Eventually Utmost Restraints pushes Elise over the edge of pain and she beings to release some of her suffering through the form of tears. Enjoy this authentic play session. 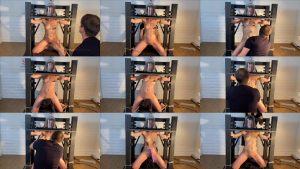