UltraGirl’s latest foe has devised an ingenious torment for her! It begins with her being bound outdoors to a tree. This seems like no problem for the intrepid superhero, but she quickly learns that she is highly susceptible to cold temperatures, and the frigid air immediately saps her strength! It also turns her nipples into erect stones, and they poke quite prominently at her super outfit!

Ball gagged, the helpless heroine feels her strength ebbing away by the second, and she is no match for the villain who leads her on a walk through the bitter temps to his lair! Once secured in his lair with no hope of escape, UltraGirl finds herself bound to a chair; her legs spread wide open and held fast with his specially created rope which has a tensile strength equal to the strongest steel. 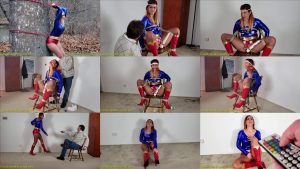