Brooke’s boyfriend has been quite frustrated. She doesn’t enjoy the bondage games he insists on playing, but he’s determined to change that. Now, bound and gagged spread-eagled on the bed, she struggles in vain as he decides some forced orgasm therapy is the perfect cure!

Spent, she lays there weakly as her boyfriend leaves her bound and gagged in a post orgasm stupor. In the back of her mind, she realizes she’ll be far more interested in his games in the future, but of course, she won’t let him no that, as playing the reluctant struggling damsel is far too fun! 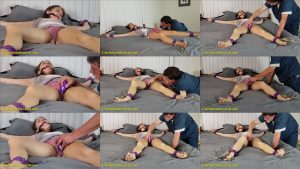 Rope Bondage - Paige Erin Turner Bondage – I Bet I Can Get Out of That - Tightly bound and gagged Pa...
Sarah Brooke is captured, tied in a strappado and whipped - In the Basement Dungeon HD - Once prope...
Rope bondage - Helpless Robin The Girl Wonder is bound and gagged - Cinched and Secured
Cassandra is ballgagged, hooded, and then face wrapped with electrical tape - Shinybound Cassandra C...
Leather Bondage - Slave orgasm with the wand - A special reward for a slave is bound and gagged
Nice Strict Hogtie - Dee Williams.. Come Over and Tie Me Up - Tie up extremely tightly in nylon rope...
Handcuffs Bondage - Michele James is arrested at home - Part 1 of 3 - Gotcuffs video
Extreme bondage - The New slave arrived - Slavegirl is naked and on all fours with Master - Bondage...
A Christmas present - JJ Plush bondage – It wasn't a gift, it was a very bad Santa -Extreme bondage ...
Rope bondage - Slave vibrated to orgasm - Juliette is tied spread eagle and stretched out for gettin...
TAGGED ball gag, bondage, Brooke Bliss, forced orgams, gagged women, rope bondage, spread eagle bondage, struggle