Toned and naturally busty Elle is an undercover op, with the cover removed. Literally! We join her while she discovers herself to be locked in a gloomy cellar. She has been stripped and is a little annoyed to say the least. But, something is stalking her in this strange place, and before she knows it, being locked in is the least of her concerns. Now she is all trussed up and tape gagged too! Wriggling and mmmmmmpppppphhhhhing on a workbench, the muscular babe is all helpless and straining with much subdued energy. She isn’t going anywhere. Or so we might think, for that is when she wiggles down from the bench and begins hopping over to an inner door, which eventually she gets open. This leads to a second chamber, where the gagged and bound agent continues her struggles. Eventually, she is free! She heads on up to the main house, for what she believes will be a little payback! As the nude gal wanders through the hallways, she calls out to her dark captor to materialise. And when he does, she swiftly knees him in the nuts. Triumphant, and about to call this one in, Elle turns and strides away, only to be felled by one of those pesky Borderland Bound invisible trip wires! Hitting the deck, the asswipe is soon upon her, and so now it is time for the spunky spygirl to be all tied up again. Gagged and bound in a downstairs room, the gag fuming beauty is once more on the downside of her fortunes. Even more so when she next has her mouth stuffed with cloth and sealed up with clear tape. She is soon hogtied also and now the twisting, buttock arching minx must endure this latest phase of her tight captivity. It’s just one extended hogbound and humiliated episode in this latest chapter of Agent Elle’s unpleasant captivity… 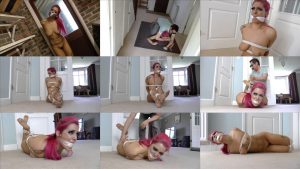