Ultra Girl is on a warpath! She has tracked down the slave trafficker’s hideout, and since her sister’s disappearance, this time she is making it personal! Now in part 2- Ultra girl has busted out of her chains and tracks down the henchman.

He is ready for her and takes her down with a tranquilizer dart to the neck! The henchman uses her weakened state to get some vital info.. That her powers come from her power belt! He quickly removes it.. 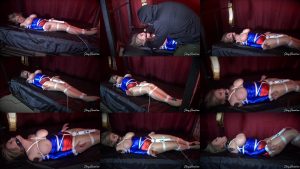