In the past, Whitney let her husband’s body guard tie her up. She liked it do much that she wanted him to do it again. With her husband resting in the next room, she went into the living room where the body guard was also resting. She got his attention and told him what she wanted, to be tied up and this time played with. When the man was hesitant, Whitney demanded and told him not to worry about her husband because she gave him something to insure he would rest for the rest of the night. So, the man gave her what she wanted and soon he had her tied up tight and gagged. But Whitney wanted him to hurry up and play with her. Having the whole night, the man left her to struggle bound and gagged. Then to make sure she could not move, he tied her in a very tight and restrictive ball tie and left her this way. 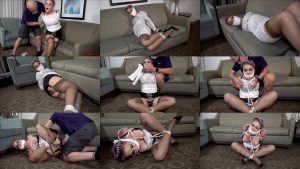