Whitney Morgan and I have been partners on the force for a decade yet neither of us has gotton promoted to seargant. we were discussing a huge case in the breakroom a few days back and getting that collar was a guaranteed promotion. We didn’t realize rookie cop Adara Jordin was ease dropping … the next thing we hear is that she landed the bust and got a promotion! I tell Whitney I can’t believe that dumb blonde bimbo will be our boss and we plot a devious payback for the naive new cop. Adara waltzes in so happy and bragging about her new promotion to sargeant … we let her carry on for a few minutes then Whitney grabs her roughly and I stick my g in her mouth. We demand that she strip off her uniform and once she’s nude I tie her hands together behind her back. Whitney seizes the opportunity to grope her ripe body then she whips out her police baton and surprise! It’s not a baton – it’s a dick on a stick. Whitney forces it into the platinum blonde bimbo’s mouth as I add a chest harness roping up her big tits. We laugh and mock the rookie bitch then Whitney pulls out my dick on a stick and we taunt her that it would look good stuck up her ass. We push her down to the floor and Whitney straddles Adara fucking her pussy good and hard with the dick while I bind her crossed ankles together. We double team her with some hot double penetration then flip her onto her back for a good ole spit roasting! I slap her face with the cock then force it back into her mouth face fuckinng her while Whitney fucks her pussy. After we tire of abusing the new cop Whitney peels down her panties and stuff Adara’s mouth with them. We wrap layers of elastic around and around her pretty face gagging the bitch then off we go leaving her helpless struggling awaiting the rest of the force to show up … 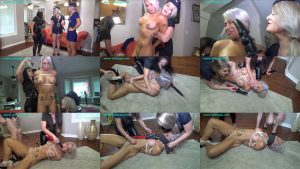