JJ Plush comes home to find a man walking out her front door. Believing he is here to fix an appliance, she asks him if Sahrye, the baby sitter explained the problem to him. When he tells her that, she has not, JJ tells him to accompany her to the basement so she can show him. As she leads the man downstairs, JJ starts to wonder where the baby sitter is. Then as she points out the problem with her dryer, she hears a noise upstairs. The basement door opens and in walks Sahrye with her hands tied behind her back and a gag tied in her mouth. It turns out that the man JJ thought was a repairman is actually a robber who came into her house, tied up the baby sitter and put her in a closet. But somehow, Sahrye got herself loose. Now the man has to deal with both the baby sitter and JJ. He takes them into another part of the basement. There he makes JJ lay on the floor so he can re-tie Sahrye. When he is done with her, he ties JJ up right next to her. Then after leaving the girls for a short while, the man returns and gags them one by one by stuffing their mouths with panties and taping them up. Finally before he leaves them to make his getaway, he hogties both of them. As a final act to humiliate them, the man pulls their tops open and their bras down to expose their boobs. 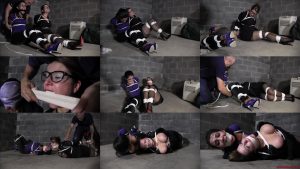