Natalia is quite serious in preparing the models for a Chastity Deal in the Netherlands, it seems! She is even stricter than I am, and it sometimes is a little worrying.

After a nice nap, Bex White woke up in her Carrara belt, still at Natalia Forrest’s house for her Casting. She was going to have to spend quite a long time in the belt, Natalia insisted, if she ever wanted to know what it feels like.

Maybe Natalia is thinking about all the harsh Chastity Deals I have put her through. She still did not unlock Bex, not even for any toilet visits, but she did allow her to shower. In the belt of course. Natalia commented to Bex that she seemed to be handling it well. She proceeded to give Bex clear instructions to wash herself in the shower, soaping up and rinsing, letting the soapy water get in the belt to get clean. Bex was a little confused, she wanted to clean her bits, but she couldn’t get her fingers in.

She did manage to get her fingers in the waist belt (the stomach is soft so all girls can do that), but Natalia immediately told her to stop doing that! Wow, she is strict. Bex seemed quite relaxed, even with Natalia shouting at her, she was pleasantly surprised the belt had gotten all warm from the hot water, which felt nice.

After her shower, she told Natalia she had brought her special moisturizer that she needed to prevent getting dry skin. Natalia did not react to that very well, getting angry with Bex for trying to moisturize between the waist band. 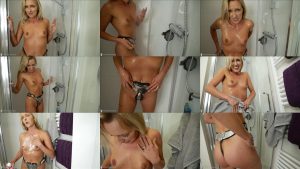