She ties Krystal’s wrists in front of her, and asks her how she feels. Krystal still isn’t sure about the rope, so she tells Nyxon she’d rather just take the glam photos and be on her way. Nyxon flashes an evil grin, and places her hand tightly over Krystal’s mouth. Krystal struggles under Nyxon’s grip, while Nyxon explains to her how she’s going to model for her bondage website, whether she likes it or not.

The next scene opens up with Krystal tight up tightly with white nylon rope. She begs Nyxon to let her go, but Nyxon calmly tells her No. She places a huge metal spider gag into Krystal’s mouth, then tells her to make sure she struggles really hard for the camera. 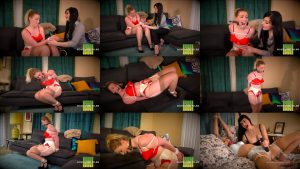