Nyxon, upset because she doesn’t want someone as uncool as GiGi at her party, tells GiGi to have a seat at the bar. She pours GiGi a glass of wine, and tells her to drink it fast. If GiGi is still there once her cool guests begin to arrive, Nyxon will be mortified. GiGi begins to feel a little woozy, and is having trouble keeping her eyes open. 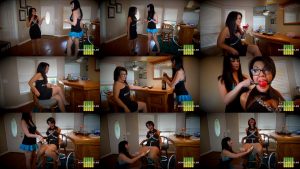