NMF, the National Missions Force, a shadowy semi-autonomous spy organisation which carries out dangerous missions with plausible deniability by using part-time agents drawn from unexpected walks of life. One of these part-time agents is Agent Forrest, whose cover career as an international model gives her the excuse to travel world-wide. She is a relatively new but very promising agent- last year she broke up the notorious Ice Queen’s diamond smuggling operation.
Her boss brings her in for a briefing on her new mission: the NMF are investigating a gang called The Underground who are kidnapping models. They don’t know what happens to the girls who have disappeared. Are they forced into prostitution? Or possibly even trained as femme fatale agents for an enemy spy agency, sent out to seduce world leaders and businessmen to learn all their secrets? The NMF have identified a photographer who they believe is scouting girls for the gang; several models who worked with him subsequently disappeared.
Agent Forrest’s mission is to go to the photoshoot, allow herself to get kidnapped by the gang, play along with them and figure out what the gang is up to, then either escape or get a message out to the NMF who will come to rescue her. She is given a small location transmitter hidden in her shoe heel to use to summon help if she needs it….
Hywel’s note: there’s quite a saga behind this, the longest, most complex and most expensive custom shoot we’ve even done. But I think I’ll wait until the end of the film to tell all… So buckle in for the first installment of our seven part, four-hour bondage epic, and I’ll tell you all after part seven! 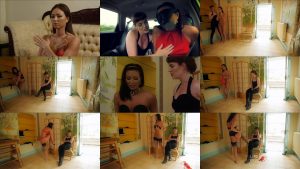