Next the barefoot babe is dressed in lingerie and post-tied legs apart in a hands over head position. Despite her protests, the villain cleavegags his pretty prisoner and watches her squirm. Soon he cuts away her lingerie to expose her ample breasts and snips off her panties, then adds more rope to secure Keisha to her post. This isn’t what this bondage-loving lady was hoping for… or is it? 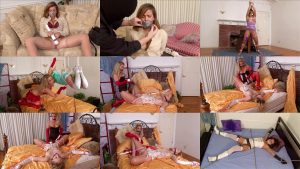