Fancy floral frocks seem rather overly dressy for their surroundings it’s certainly not the lunch spot they had been planned to arrive at. No fine food for them, their mouths are stuffed instead with red bananas and clear tape sealing their lips shut, thoroughly gagging the glamorous gals.

They resist with all their might but the orgasms take over and ravish their bound bodies in turn, and then together they bear their burgeoning burden of bondage. He leaves the vibrators nestled into their vaginas, with the helping hand, or rather leg, of their torn sheer hose holding them in place, then leave the pair to endure their continued torment. 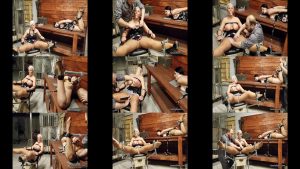