Kendra and her boyfriend have a scheme where she lures men to her place, gets control of him, and then she and the boyfriend rip the person off. Today she has a man at her place. When he steps away for a minute or two, she calls her boyfriend to let him know things are going according to plan. She tells him to call back in about thirty or so minutes when she hopes to have the man under control. But when the phone rings, things are not as planned. Because Kendra is tied up with her pantyhose and gagged with a necktie. It turns out they have messed with the wrong guy. The man answers the phone and explains to the boyfriend how things are really going to happen today. He then ties Kendra more secure and gags her again by stuffing and taping her mouth. Then he makes things a lot more humiliating for her with her hogties her with her panties pulled down. He adds a finishing touch by tying a pair of pantyhose between her legs and up her exposed pussy. 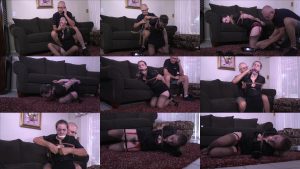