GiGi’s new neighbor has been throwing some pretty wild parties since she’s moved in, and they’ve been keeping GiGi up at night. So, she decides to snoop around to see what these parties are all about. While she’s peering in the window, Nyxon spies her and opens her front door. Shocked, GiGi extends her hand and introduces herself. Nyxon invites her in, and offers her a special drink. While the two ladies are sitting on the couch chatting, GiGi begins to feel a little woozy. She stands up, but immediately falls back onto the couch and closes her eyes. When she wakes up, she finds herself bound with rope and gagged with a ballgag, and Nyxon smiling at her. Nyxon explains to GiGi that the wild parties she throws are actually swingers parties, and in fact, she’s having one tonight. At this point, Nyxon’s phone begins to ring and Nyxon tells GiGi that that must be one of her guests calling her. She then goes on to tell GiGi that since she’s already there and tied up on the floor, she might as well stay for the party. Nyxon is sure that her guests will enjoy the feisty party favor. 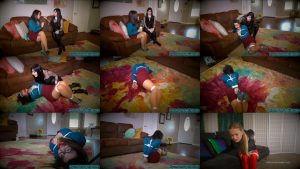