Assistant District Attorney, Carissa Dumond has been waiting a long time for a huge case to launch her career to the next level and she’s convinced that finally things are about to break for her. I’ve been a well known cartel Hitwomen and I contact Carissa laying it on thick about fearing for my life. I tell her I want to turn on the cartel and be a star witness. I ask Carissa to meet me at an abandoned auto shop. I tell her to come alone because the cartel has moles in the DA’s office. The gullible MILF rushes to meet me and she’s thinking about the bragging rights she will get about the case and how she single handedly took down the cartel. It never crosses her mind that she’s walking into a trap. As soon as Carissa arrives she begins to question me about the evidence I have. I inform Carissa that all the evidence she will ever need is in the bag in the middle of the room. Carissa runs over to the bag in anticipation and all she finds is a lot of rope, a roll of tape and rags. Suddenly I pull out a white cloth and move in close … we fight and struggle for the cloth and finally I am able to wrestle the busty ADA pinning her down pressing the cloth over her mouth and nose. The room blackens … 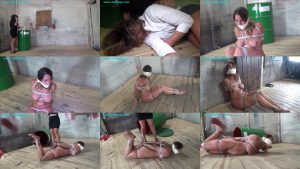