An Li has Elise Graves under her control once again. She begins this intense play session by locking Elise’s ankles into heavy wooden stocks and then tying Elise in her straitjacket firmly to the bed. This results in Elise feeling incredibly vulnerable and helpless. Elise begins to freak out a little bit, as she can feel her claustrophobia begin to creep in. An Li knows that Elise is struggling to deal with the bondage and so she helps direct Elise’s focus by clamping her labia into a beautiful Steelwerks pussy clamp. It’s easy for Elise to focus on this, as An Li begins to electrify it! To make Elise’s situation even more intense, An Li introduces an electro wartenberg wheel to the inside of Elise’s stretched-open pussy! Talk about trying to stay still! An Li is simultaneously caring and provoking of Elise’s helplessness. Stay tuned for part two, where Elise’s fear increases greatly due to breath control. 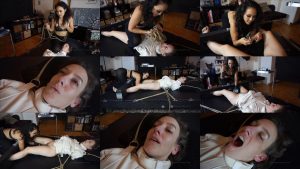