Ayla was so excited to finally reach her 21st birthday! Now that she was of legal age, she could access the trust her deceased parents had set up on her behalf before their accident that forced her to move in with her uncle. Now, she could finally strike out on her own with enough money to make sure she lived a comfortable life.

Her uncle seemed happy for her as well, and made them each a cup of his famous hot cocoa to celebrate. Ayla didn’t know it, but her cocoa contained something extra a little something to help her relax.

As the spiked sweet to effect, the poor girl grew very drowsy until she nodded off next to her uncle who wasted no time in stripping her out of her sweater dress and leaving her in her bra and panties.

When she finally came around, she found herself strictly bound and gagged, a crotch rope tied very tightly against her poor pussy! She mewled and fought the ropes, wondering what had happened, when her uncle returned 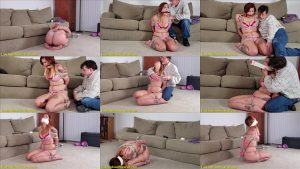